Get a Free Quote

People hate bugs, but people despise spiders.  Generally larger than your typical pests, their eight legs give them a look that appears creepy or scary to most people.  Spiders have been depicted in mythology and folklore all through the ages.  In Lord of the Rings, Shelob is a demon in the form of a spider.  Gollum lures Frodo to Shelob in the hope of grabbing the ring after Shelob attacks our hero.

While Aragog the spider in the Harry Potter series attacked Harry, Ron, and Hermione in Chamber of Secrets, by the end of the series, the spiders were on the side of good against Voldemort and his Death Eaters.

Many folklores, including African and Native Americans, view spiders as tricksters, but in many cases, they are viewed with high esteem and the most cunning of all the animals.

In Indigenous Australian art, spiders are associated with some of their most important rituals.  In many Pacific Islands, spiders are said to have created the universe.

Pinnacle Pest Control Will Take Care of Your Spider Problems, but What Does That Mean? 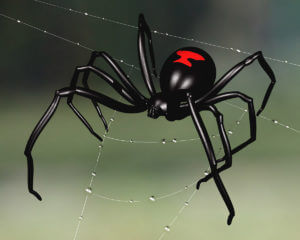 We will often get calls from people who complain that they have a spider problem.  As with any other issue, our first step is to come out to you and do an inspection to see what the problems are and how serious they are.

When we see spiders, it is usually an indication of another problem.  Spiders are incredibly talented hunters.  They hunt, trap, and eat other insects, such as mosquitoes, flies, moths, and even butterflies.  Some spiders will also eat crickets, beetles, and grasshoppers.

In Sacramento, the spiders we see most are Black Widows, Wolf Spiders, and Cellar Spiders.  Cellar Spiders are also known as Daddy Longlegs or Granddaddy Longlegs.  For the most part, when we see spiders in an area, it is an indication that we have to look deeper to see what the underlying issue is.  Spiders go where the food is.  If you have spiders in your home, it usually means they have found a plentiful supply of food, and that means you have an underlying pest problem that you might not even be aware of.

Spiders are usually not the problem, they are a symptom of the problem.

Regardless of the spider that crawled on Peter Brady’s chest, we love spiders.  We have similar goals: to rid your home of insects.  However, even though the spiders are not usually the primary problem, it does not mean you have to live with them in your home.

When you call Pinnacle Pest Control, we will come to you to diagnose the problems that you see, and even check for and find the ones you don’t.  We will take care of your immediate issues and implement an ongoing service plan where we return every other month to strengthen the barrier keeping the pests, including the spiders, away from your home and family.

Call our offices to set up an appointment.  We can be reached at 916.381.5793. Our Integrated Pest Control Services come with our one-year service warranty.  If the insects return, so do we.

Get a Free Estimate