How to Identify Mouse Sounds in Your Home

Get a Free Quote

House mice don’t seem as intimidating as other pests like huge brown and black rats, but they are still capable of causing the same disease and destruction as these larger rodents. If you can recognize the sound of mice in a home, it’s possible to eliminate them before they can cause serious damages.

So how can you identify mouse sounds in your home? Mice are quiet creatures that don’t make much sound. Like other rodents, mice create ultrasonic sounds that are hard for humans to discern. If there is a mice infestation in a home, occasional scratching, gnawing, scurrying, and squeaking noises inside the hollow walls may be heard if you listen closely.

What Sounds Do Mice Make?

The 2014 survey by the National Pest Management Association (NPMA) revealed that around 21 million US homes are invaded by mice and other rodents every year during winter. This is because homes provide these creatures with warmth and a stable food source that is hard to come by outside.

If you suspect a mice infestation in the house during this season, it’s going to be hard to track these pests by simply relying on the sounds they make. It’s better to observe other signs of their presence, such as droppings and gnaw marks.

Mice are more active at night because of their biological clocks. As you tuck yourself into bed at night, that’s generally the time when a mouse’s day begins. It’s possible to hear them create tiny noises like chirps and squeaks when they are searching for food and water. Aside from these noises, they can also be heard scampering and scurrying inside walls and along baseboards.

How is Mice Noise Different from Other Rodents?

Mice are just one kind of rodent; rodents also include other bigger species like rats and squirrels. They mainly communicate through ultrasonic sounds that can only be interpreted by other rodents. Although the sounds that these rodents create are quite similar to each other, there are still important distinctions that set one species apart from the rest.

Mice utilize ultrasonic vocalizations that humans can’t hear without the proper tools or devices. They use it to talk to other mice about their environment and its physical condition. These creatures are also more likely to create audible noises than rats.

Mice produce high-pitched squeaks that are similar to chirping birds when relaying messages to each other. It’s also possible to hear them scuffling around as they skitter through the pipes and walls. You might also hear scratching sounds created by their claws whenever they attempt to grip different surfaces.

Like mice, rats are also quiet creatures. Although they squeak every now and then, they are more likely to be heard when they move around. They can also hiss audibly when in distress to ask for help or warn others about a threat. If you move closer to their nest at night, there’s a chance that they are chattering to each other.

Using a special device, the ultrasonic vocalizations created by rats can be heard as chirping or whistle-like sounds. A pup can create this sound when separated from its mother, but adult rats also use it to communicate.

These rodents are easier to identify than rats and mice because of their bushy tails. Squirrels are also typically louder than these pests since they vocalize in a way that humans can also hear. They are typically heard chirping and chattering in parks and trees during the day.

Squirrels can be heard making alarm calls which sound like “kuk” and “quaa.” The former is heard in rapid succession when the creature warns other squirrels nearby about imminent danger, while the latter is for when the threat is gone.

Mouse Sounds and Their Meanings

If you’re trying to decipher what the mice are doing based on the sounds they make, here is a quick guide about different mice noise and what they mean:

Aside from sound, mice can communicate with each other using several ways. The occasional squeaking you may hear in a mouse infested home barely scratches the surface of what a mouse can do to communicate with others. Here are three important ways of communication that mice use when relaying messages to each other:

Places in Your Home Where You Might Hear Mouse Noises

Mice love hanging around places that are dark and quiet because they are shy creatures that want to be left alone. If you hear mouse noises in any of these places, it might be time to set up traps or call a professional exterminator before the infestation worsens: 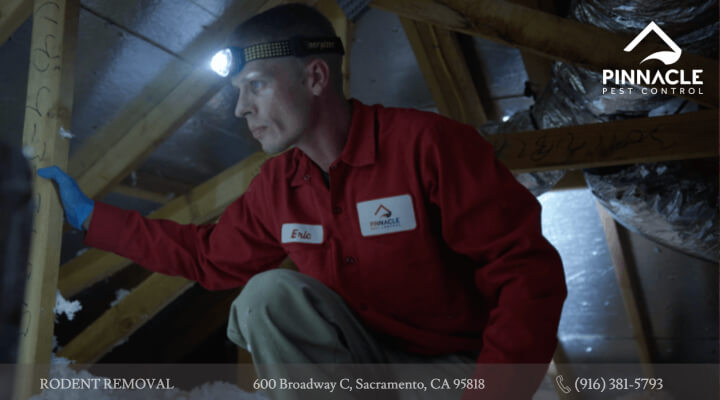 Even the smallest squeaks and chirps you might hear from mice should not be taken lightly. These rodents can infest a home and put your family in danger, which is why it’s crucial to get rid of them immediately.

Here at Pinnacle Pest Control, we provide rodent removal services that will keep the pests from invading your home again. Call us now to learn more about our safe and effective pest control services.

Read more: How to Lure a Mouse Out of Hiding

8 Tips: How to Keep Mice Out of the Shed

When mice and rats find their way into your property, one of the places they…

Can I Break My Lease Due to Mice Infestation?

Mice infestations cause several headaches for both tenants and landowners. In the event of an…

Home Remedies for Mice in Walls

There are three reasons why mice choose to invade a home: warmth, safety, and food.…

Get a Free Estimate